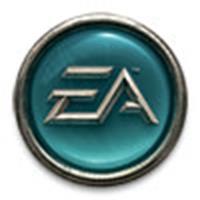 May 4, 2007 at 5:11 AM ET
Cheeser     HPANA (via EA Games)
harry potter and the order of the phoenix, videogames, harry potter videogame, video game news

Electronic Arts (EA), the company behind the Harry Potter video games, set up a "Fan Council" last year to get feedback on what people would most like to see in the upcoming Order of the Phoenix game. The first meeting of the council was in August 2006 and last Thursday the group was invited back to see what had been achieved in the intervening eight months.

Charlotte, HPANA's correspondent in the UK, made the trip and filed the following report. 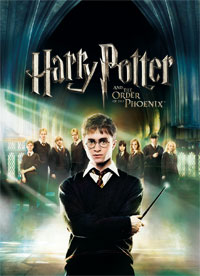 Our day started at 10 a.m. with all the fansite representatives gathering at EA's new studios in Guildford for breakfast. There were many familiar faces among the EA team but unfortunately no Matt Birch (the extremely enthusiastic game producer was missed by several of us who met him last time).

We were officially welcomed to the studios by Harvey Elliott, the game's executive producer, who emphasized how important the feedback they've received through the Fan Council has been. The team checks the forums on the various fansites regularly and they've been really pleased to see your reactions to the screencaps, interviews and videos as they've been released. Harvey also showed us the opening sequence for the OotP game: A camera follows Hedwig through the courtyard, into the entrance hall and around Hogwarts, before coming to rest on Harry's arm in the Gryffindor Common Room (GCR). When we visited in August, only the GCR had been completed in any detail, so to see that the rest of Hogwarts was now completed to the same high standard was fantastic.

Producer Justin Manning and designer Chris Roberts then told us about what the team had been working on in the last eight months. They have:

They also talked about what they've learned from you, the fans:

To respond to these concerns the number of characters has been dramatically increased since Goblet of Fire. There are students from various houses, both male and female; and there are ghosts (including Moaning Myrtle who looks after the "Room of Rewards") and portraits to interact with. Dialogue from the book is there including Hermione's famous remark that Ron has the "emotional depth of a teaspoon", and music from the movie soundtrack is ever-present as the rights to Hedwig's Theme were licensed.

Sadly, there were some things which they wanted to do but haven't managed:

The dramatic exit of Fred and George, however, is definitely in the game! 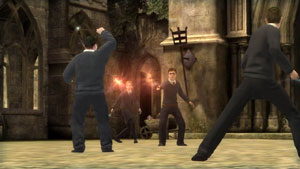 For the rest of the fansite day we were split into houses (Slytherins rock!). It was finally time to test the game (I'll tell you more about that in my third report) before we broke for lunch.

After a fabulous buffet lunch we got the chance to have a mini-tour of the studios guided by Justin. We saw the latest revisions to Hagrid's Hut which has apparently been reworked several times to get it just right as it's such an iconic location. We were able to see the various layers – the basic art layer of the wall of Hagrid's Hut, one black and white layer denoting how much 'shine' each brick should have, and one further layer which determined whether a brick protruded from the wall or not. We also saw one of the courtyards with and without lighting – the difference in detail being phenomenal. It was like comparing computer graphics from years ago with the very best from today. 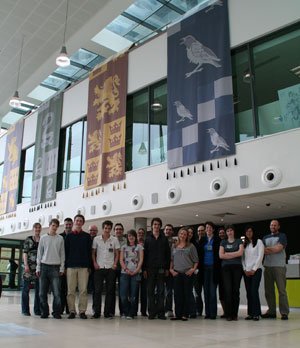 The fan council under house banners at EA

Then it was off to see James Slavin who treated us to an extract of music from the game. The clip we heard was from the climatic battle between Voldemort and Dumbledore at the Ministry of Magic. Hedwig's Theme has been reworked into several different versions by composer James Hannigan to suit the varying moods of the game. The version we heard was a very dramatic interpretation with brass and drums and it was absolutely superb! It transported me to the duel even though there were no images to look at. The music was played by the London Philharmonic Orchestra and a 12 voice choir which was triple-tracked so it sounds like 36 singers. The audio team have also been out and about recording various sounds including the clink of instruments for the hospital wing. And of course, they've had actors in to do their lines. The following characters in the movies are being voiced by their film counterparts: Ron, Hermione, Fred, George, Luna, Ginny, Draco, Crabbe, Goyle, Colin Creevey, Tonks and Prof. Flitwick. Dan Radcliffe was busy performing in Equus so Harry is voiced by Adam Sop who also recorded some of Dan's ADR (Automated Dialogue Replacement) for the movie.

The rest of our afternoon was spent interviewing Harvey (Executive Producer), Wayne Stables (CG Supervisor), Chris (Designer) and Kelvin Tulte (Art Director), getting answers to your specific questions. More to come on that next week!

Finally, the whole group met up again for a bite to eat and drink. We were able to give EA positive feedback on what we thought of the day and the game, and also expressed our appreciation at being involved in the Fan Council. In summing up the day, I can only repeat what I said to them: every time I go there I'm blown away, not just by the game, which is fabulous, but also by the enthusiasm and friendliness of the team.

Harry Potter and the Order of the Phoenix will be released on June 29, 2007 and will be available on the following platforms: Nintendo Wii™, PlayStation® 3, Xbox 360™, PlayStation® 2, PSP® (PlayStation® Portable), Nintendo DS™, Game Boy® Advance, and Windows PC.

Stay tuned to HPANA for more updates all month long!