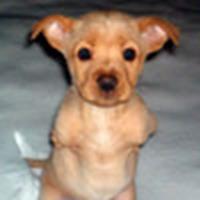 The family that owns the dog everyone's talking about wants to clear the air about recent news involving their beloved pet.

Faith, a dog that stands upright on its sole two hind legs, has been getting a lot of attention after it was revealed the family has been in talks with Warner Bros. about a possible appearance by Faith in a future Harry Potter movie.

Owner Jude Stringfellow, of Oklahama, wrote in to HPANA:

Faith is really cool, and we're really excited about all of the attention she is receiving right now because of the various world-wide announcements about her possibly being in a HP movie. I wanted to clarify a few things:

THANKS... Faith's new site is going to be: www.faiththedog.net

and will be available in a few days.

While the new site is being prepared, you can browse Faith's old site

. The family will be featured in September's National Geographic for Kids and Jude tells us they're flying to Hollywood to film a segment on Entertainment Tonight. Faith has her own personal attorney and photojournalist, and even has a book written about her that's waiting for a publisher.

Update: We've got photos! Here's one of Faith walking

in July, Faith reclining on the couch

, Faith on the floor

, and here are the Stringfellow children: Laura

(18). Thanks to Jude for all the background information and pictures.