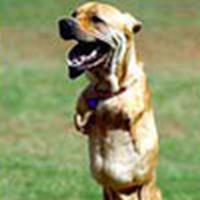 Two-legged dog may walk through 'Fire'

a cameo role in Harry Potter and the Goblet of Fire, according to reports.

At three feet tall, Faith was born with the disability and her owners in Oklahoma say they've been contacted by Warner Bros. but that nothing has been finalized:

Faith's owners in Oklahoma City in the U.S. believe the part could involve her appearing as the result of a spell.

But the Stringfellow family said British trainers working on the film had not yet confirmed a part for Faith, who was born with the disability.

The dog has its own showbiz lawyer, and has been featured on the Ricki Lake show and in various U.S. newspapers, according to the BBC.

Update: A video of Faith

is available. Thanks to Harry Potter's Page

and Justin for the tip!

Update #2: Faith's owners wrote to HPANA to clear up recent attention and even sent some photos.