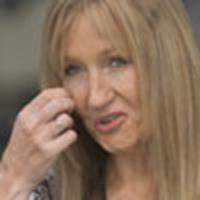 of meeting Rowling. In the first, attendee Joanna asks her some direct questions and gets some indirect answers, as is the author's style:

Firstly, I asked if there was a reason why Ginny Weasley is always associated with cats (she is described by Percy in COS as being a cat lover, is often described as being curled up like a cat and once made a noise 'like an angry cat') but J.K. answered 'No, there's not, although you are obviously a very careful reader.'

... what would happen to Kreacher and 12 Grimmauld Place now that Sirius has gone? Although she dodged this question well she did say that we will find that out very early on, right at the start of the next book.

... I then asked if it was still the headquarters of the Order [and] she just said 'You'll find that out too!'

The other report, from fan Ethan, talks more about the experience of actually meeting Jo:

I was really nervous, but she held her hand out and I shook it. I said, "Hi, your books are great," and she said, "Thanks" ... it was amazing, the whole thing! I was absolutely ecstatic beyond belief.

also has a video

from Ethan that captures the atmosphere of the event.