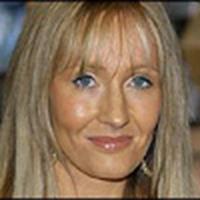 Harry to survive to book 7; Rowling 'halfway' through Potter 6

JK Rowling attended the Edinburgh International Book Festival today and gave fans some interesting tidbits about the future Potter books as well as the status of Harry Potter and the Half Blood Prince. There was no announcement about the publication date.

was there to hear Rowling tell fans:

Rowling also states that fans should be concentrating on answering two questions:

Check out some photos of Rowling here

and a full transcript of the event is available now.

According to BBC News

Rowling told those gathered that:

Harry would "survive to book seven" but refused to confirm whether he would grow up to be a wizard.

of the event including exclusive pictures

! Thanks to Ann-Marie Wales and The Leaky Cauldron