After making international headlines and enduring the wrath

of Harry Potter author JK Rowling herself, the person responsible for releasing

a false title -- Harry Potter and the Pillar of Storgé -- for the series' sixth book offers an apology and explanation in an interview with HPANA.

just days after the hoax (perhaps because of the hoax?). It has since been confirmed

The prankster, a 19-year-old male student at the University of Florida, speaks:

Firstly I would like to offer two apologies. I owe an apology to all of the Harry Potter fans that I lied to; I never thought my hoax would go so far and I felt awful when some of you got so excited about knowing the title. I am sorry. I also would like to apologize to J.K. Rowling, as I did an awful thing by impersonating her. I consider her a literary genius.

In the end, the hoax was all in good fun. I thought the title was rather funny and had hoped that at least some people would get a good chuckle out of it.

And now, explained in full, here's what happened -- straight from the horse's mouth:

Do you have any official connection to JKR, Warner Bros., or the book publishers?

No, I have no connection to them whatsoever.

What made you think of doing this, and specifically, the timing of it?

I had recently finished a re-reading of Order of the Phoenix and it got me excited about the Harry Potter series again. As a result of that excitement, I stumbled upon JKR's website for the first time and was fascinated by the unopenable door. I also thought it was great that she was dispelling some of the rumors about the series. Somehow I put two and two together and the hoax clicked in my mind.

The timing of the event was never planned; it was simple dumb luck on my part that I released the hoax at the start of a weekend so that it [became] more effective. 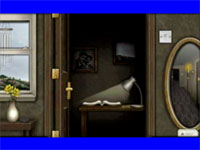 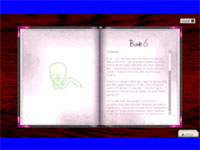 How did you do it?

A hobby of mine is computer graphics/video editing, so I knew I could produce a realistic video. I realized that this was exactly what I needed to make the hoax believable.

and Adobe After Effects

. In Photoshop I edited and manipulated pictures from JKR's site, and in After Effects I animated them into the finished video. I did not use [Macromedia] Flash at all. The blue bars (see image) at the bottom and top are a result of me changing the aspect ratio of the video without distorting it so that I could compress it into an MPEG file. I whipped the video up in about two hours.

As far as the "message" was concerned, I just tried to mimic JKR's style as much as possible. I came up with the title Pillar of Storgé, trying to formulate something with a hidden meaning that people would be able to figure out. It's an ugly title, but I'm quite fond of it.

What did you expect as a result of the hoax? Did you think it would receive the worldwide press it garnered?

I NEVER expected this much attention. I even wondered if anyone would believe it at all. My original goal of the hoax was that a rumor about the title would slowly creep through the Harry Potter community (much like the Green Flame Torch rumor), and that JKR would eventually dispel it as a myth (perhaps releasing some real information while doing so) on her site.

I never wanted the attention of all the Harry Potter fans; there was a clear and specific reason for the hoax and it involved the attention of only one woman. I was highly amused by the fervent guessing of the meaning of the title by eager fans and by the international press that it received.

Finally, a closing thought from the anonymous mountebank: "If I had not started the hoax, would we all know the real title to book 6 right now?" Read The Leaky Cauldron's analysis

of that question. In the meantime, consider what an astute reader over there observed: Rowling said on her site that "as a little bonus, and compensation for having been messed around by Mr. or Ms. Storgé, I shall tell you one thing without making you shift any bricks at all: the HBP [half blood prince] is neither Harry nor Voldemort."