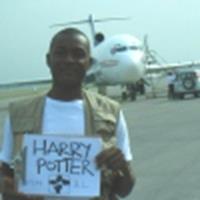 The first plane from the Helping Haiti Heal

initiative touched down yesterday as a result of the $123,000 raised and donated to Partners In Health.

Pictures of "Harry" -- the name of the plane -- and his over 16,000 pounds of life-saving medical supplies, which landed in Port-au-Prince at 8:22 am EST on Wednesday, March 3, are available below.

But the real good news is a major announcement from Andrew Slack, executive director of the Harry Potter Alliance, which organized the appeal:

Due to a discount they [PIH] got with the planes, the money we raised has not allowed for three planes. It has allowed for five! The first plane, "Harry" arrived yesterday in Port-au-Prince. There will be four more planes sent every other week for the next ten weeks.

Like many others, I made a personal donation to the DEC shortly after the earthquake happened; but never did I expect such an amazing response from all of you. You cannot imagine how awed, moved and humbled I am to know that planes named Harry, Ron and Hermione are going to be flying off to help. I did not need this to remind me how extraordinary Harry's fans are, but you keep giving me proofs. THANK YOU! - Jo