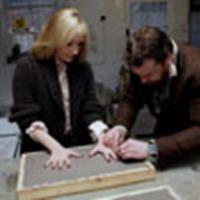 JKR leaves her handprints in Edinburgh

J.K. Rowling's is set to leave her handprints in Edinburgh today

. Ms. Rowling agreed to have her handprints displayed for posterity in honor of receiving the Edinburgh Award last year

Jo had this to say

I was delighted to receive the Edinburgh Award, as this city and its wonderful inhabitants have meant so much to me for the last 15 years.

It is particularly appropriate for a writer's hands to be represented, so I am deeply honoured to have my keyboard-chipped fingernails, not to mention my pen-induced friction callous, commemorated in the place where I produced Harry Potter.

Ms. Rowling is the second recipient of the Edinburgh Award, Ian Rankin won the award in 2007.