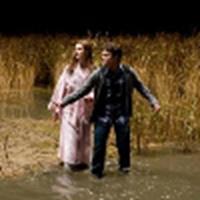 today. The first shows Ron, Hermione, McGonagall, and several other Hogwarts staff and students standing in the Hogwarts courtyard, a different angle from a secne that appeared in the recent trailer. The second depicts Harry and Ginny standing in a swampy area near during the attack on the Burrow.