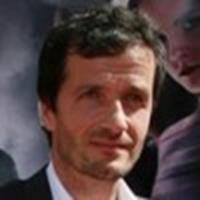 Harry Potter producer David Heyman answered some questions for HPANA at an interview today on his new film, The Boy In The Striped Pajamas.

He revealed that he has read the "first half of the adaptation" of Harry Potter and the Deathly Hallows and that the second half from Steve Kloves would be coming "in the next few weeks."

HPANA: You've said that you want each of the Deathly Hallows films to have their own identities even though it's ultimately one story. How will you apply this thinking?

DAVID HEYMAN: We try to focus on a specific theme within each film and each of these films will have a specific theme running through it. In terms of camera work and lighting there will be slight differences. We are aiming for a slightly different aesthetic.

HPANA: How are the screenplays by Steve Kloves coming along?

DAVID HEYMAN: They will be very faithful to the book. One of the pleasures of having the time to make two films means we will be able to go into more detail than we might otherwise have been able to do. If we had only done one film we were concerned that we might have to remove The Deathly Hallows. We never went that far but that would have been something that might have had to come out, which would have been terrible! The script is coming along well, I have read the first half of the adaptation. I have not read the second half, that should be coming in the next few weeks.

HPANA: The delay of Half-Blood Prince is unprecedented for such a high profile and successful franchise, and Warner Bros. has received a lot of flack from fans. Alan Horn even said the film was ready to premiere in November, yet the recent screening in Chicago produced mixed reviews. From a purely artistic perspective -- which you said was one of the reasons for the delay -- will the extra time be used to work on the film?

DAVID HEYMAN: Oh absolutely! The reason for a screening such as the one in Chicago is to give us information about any areas of confusion or pace or any issues that may arise, and work on them. So over the last couple of weeks, we have been working incredibly hard on the cut of the film and we will make changes to improve it. It is something that we have done with every film in the Harry Potter series.

(Many thanks to John Millar.)

also spoke with Heyman. Check out his responses at their respective sites.

Talking about his new project:

Montage of stills from The Boy In The Striped Pajamas, including Potter actor David Thewlis

QUESTION: What was the toughest thing about bringing The Boy In The Striped Pyjamas to the screen?

DAVID HEYMAN: It was actually a fairly organic process. I know that is going to be hard to believe but I read the book and loved the book but I was a little cautious about embarking upon it, just because of the challenges involved in bringing it to the screen. Mark Herman [the director] optioned the book and then came to me with the screenplay and it all seemed very clear to me. Mark did such a great job with his adaptation in script form and Brassed Off [which Mark Herman directed] was one of my favourite British films of the last 20 years and so the challenge in The Boy In The Striped Pyjamas was getting it done within the budget that we had because clearly there was only going to be a finite budget to make it. But Miramax were incredibly supportive and did not ask us to change the ending, did not ask us to really alter much. I suppose in terms of actually getting it made it was a fairly straightforward process. I liked the book, Mark Herman liked the book, he did a screenplay, Miramax liked the script and had always been interested in the book and decided to make it. So it was much less challenging than it might appear. I think it is just a sign of what good fortune I have had in my recent life. But I suppose one of the great challenges was looking at this from a child’s point of view and managing some of the more naive aspects of the book, which I love in the book but which when translated to film might be a little difficult and not as involving but off-putting. So trying to capture the spirit of the book, yet acknowledging the different demands of a film was a challenge.

QUESTION: How hard was it to find Asa Butterfield and Jack Scanlon ho play the children Bruno and Shmuel in The Boy In The Striped Pyjamas?

DAVID HEYMAN: It was quite hard. We had the fantastic Pippa Hall whose speciality is child actors and she found the boy who played Billy Elliott. I have known Pippa since I was a child. We had approached Leo Davis to do the casting and Leo brought on Pippa. She scoured and scoured the country. It was a fine balance because you wanted the children to possess the essence of the characters because however their imagination you are very often working with the innate essence of a child. So Pippa showed us hundreds upon hundreds of tapes of children, most of whom had very little experience. When it came down to it, our Bruno had no film experience at all. In a way part of the innocence of Asa Butterfield served us well because he was not particularly knowledgeable about the Holocaust, he wasn’t particularly experienced in film making. He became a little bit more knowledgeable of both through the process of making The Boy In The Striped Pyjamas and I think that the gradual increased awareness of both the Holocaust and the film making experience fed into the journey that the character goes through in the film.

QUESTION: Has the reaction of audiences to The Boy In The Striped Pyjamas both delighted and surprised you? Because during filming you must have worried that audiences might think the movie was too much and not get it?

DAVID HEYMAN: You are absolutely right. While I am a pretty positive type, I am burdened by a tremendous apprehension about anything that I am involved with and people’s response to it. So I was most certainly tredipatious, concerned in part that people might find it an odd blend of tone – the naivety within this rather dark world; that they might not engage with it in the way that I did. There are always those fears – that, as you suggest, the subject matter might be too tough for the sort of point of view that we take. But I think that what I am so happy about is that people seem to be responding to the film for the very reasons that we made it, because of that point of view. Some people had also suggested that viewers might be concerned that we were telling the story from the point of view of the son of the commandant of a concentration camp. But that is the thing that distinguishes this film from so many others – taking that point of view. For me, that is what – in spite of there being some dark elements about the story, and the context being a difficult and challenging one, there is no question of that – is the thing that I find very optimistic about The Boy In The Striped Pyjamas…that an eight year-old boy, whose parents and environment encourage him to be racist, be prejudiced against Jews, makes his own choice and through contact with a boy on the other side of the fence, someone who is different to himself, is able to engage and overcome any prejudice that might have been inculcated into him and forges his own path. To me that is a wonderfully optimistic, generous spirited and wonderful message to put out into the world and I think it is both true and necessary. I think it is important thing for people to consider and to embrace.

More on The Boy In The Striped Pajamas can be found in our previous coverage. [Ed: This editor found the book to be fantastic, so the movie ought to be just as powerful.]