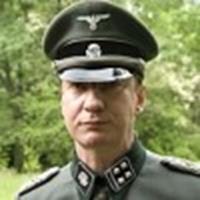 Heyman, Thewlis collaborate on 'Boy In The Striped Pajamas' adaptation

Harry Potter producer David Heyman and actor David Thewlis ("Remus Lupin") have collaborated outside Rowling's universe to make a film based on a very different kind of book.

The Boy In The Striped Pajamas

, by John Boyne, is a powerful story of a young boy who befriends, by happenstance, a Jewish boy being held in a concentration camp in which his Nazi father (Thewlis) works -- through a barbed-wire fence near his home.

Eight year-old Bruno is the sheltered son of a Nazi officer whose promotion takes the family from their comfortable home in Berlin to a desolate area where the lonely boy finds nothing to do and no-one to play with. Crushed by boredom and compelled by curiosity, Bruno ignores his mother's repeated instructions not to explore the back garden and heads for the "farm" he has seen in the near distance. There he meets Shmuel, a boy his own age who lives a parallel, alien existence on the other side of a barbed wire fence. Bruno's encounter with the boy in the striped pyjamas leads him from innocence to a dawning awareness of the adult world around them as his meetings with Shmuel develop into a friendship with devastating consequences.

The movie adaptation, produced by Heyman, was important to make because "history has a pattern of repeating itself" and must be told in "whatever form" is necessary to make sure tragedies like the Holocaust can never happen again, according to Heyman.

"I'm drawn to human stories, and this is first and foremost a human tale," said Heyman. "Whilst it is a Holocaust story set in 1940s Germany, for me, it's timeless."

"With all the conflicts going on today, whether in Rwanda, Somalia, Palestine, Israel, Darfur, Zimbabwe or Iraq, this story seems to me to be as relevant today as at any time in history," continued Heyman.

"It's one that resonates with me and has touched thousands of readers around the world. That children have the potential and the ability to overcome differences in culture and identity; that people ultimately can get along if they're not encouraged to hate; that governments, institutions and the media can and do cultivate conflict and distrust – these are timely ideas with universal relevance and I think this story makes them accessible to anyone."

Check out the trailer

and considering seeing the film when it is in limited release starting November 7 in the U.S. More information can be found at the film's official web site