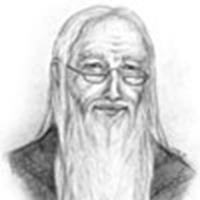 Answering a question posed to her at tonight's book reading at Carnegie Hall in New York, Harry Potter author JK Rowling said she "always saw Dumbledore as gay" and that the Hogwarts headmaster originally fell in love with the wizard Grindelwald in his youth.

Rowling also said she had read through a script for the movie adaptation of Harry Potter and the Half-Blood Prince and corrected a passage in which Dumbledore was reminiscing about a past female lover by crossing it out and scrawling "Dumbledore is gay" in the margin.

Upon hearing her response, a hush fell over the audience in attendence and then applause exploded. Rowling remarked that if she had known that would be the response, she would've revealed her thoughts on Dumbledore "years" earlier.

More on tonight's event to follow shortly, including the full question and answer segment!

UPDATE: A recap of tonight's event: Keith Olbermann, from MSNBC, introduced Harry Potter author J.K. Rowling at tonight’s last event in the States on her "Open Book Tour." In tonight’s session with over 2,000 fans in attendance J.K. answered 16 fan questions in which she revealed the above story as well as Neville’s and Hagrid’s martial status and the job occupations of Harry’s parents.

Jo read from chapter 19, after a Horcrux was destroyed and Ron returned to Harry and Hermione. The author took on the voices of each of the characters making sure that Hermione's anger at Ron was projected to the audience. At one point Jo lost her composure when she read the line "No, I heard you coming out of my pocket," which she did not finish, as the audience broke out in laughter.

Below is a summary of the questions and answers from tonight's event (paraphrased):

She was surprised that no one had ever asked her what Dumbledore's wand was made of. If ever asked this question she would have simply said "It's made of Elder" and left it at that.

In answering a question about Neville and finding love, Jo said that he married the landlady from the Leaky Cauldron (which happened to be Hannah Abbott), and that living above the Leaky Cauldron would have impressed his students at Hogwarts.

When asked why she chose Molly to kill Bellatrix she replied that she wanted to (1) show that Molly was an extremely talented witch even though she spent most of her time in the kitchen, and (2) she wanted to compare the obsession Bellatrix had with Voldemort to Molly's maternal love for her children.

The next question referred to what would have occurred if Arthur had died in Order of the Phoenix. Jo said that it would have changed books fix, six and seven and that Ron's character would have lost his sense of humor and taken away Harry's refuge at the Weasley home. She also mentioned that Ron's humor stemmed from insecurities and immaturity and that he was the last to become an adult, by facing his fears in the last book.

When eight-year-old Mia asked about Aberforth's goat, Jo asked her age and said that just for her the answer would be "that the goats were easy to keep clean and that they had curly horns," as the audience roared with laughter.

Now for the question that stunned the audience - Did Dumbledore love anyone? Jo started to say, "I always saw Dumbledore as gay" as a hush fell on the audience followed by a excited response by all in attendance. She went on to say that she had recently read the script for Half-Blood Prince and noticed a passage in which Dumbledore recalled a past female love – she immediately crossed out the passage and added the words "Dumbledore is gay" in the margin.

When asked about parseltongue, Jo answered that Ron had mastered one sound but it wouldn't be a language someone could learn.

What was in Dumbledore's letter to the Dursleys in book one? Jo responded by saying that Petunia had wanted to go to Hogwarts and by taking in Harry she was taking in a part of the world that she never participated in.

Then next question is one that many fans have answered themselves in reference to the Basilisk and why did it not kill Voldemort's soul in Harry. Rowling stated that Harry was not destroyed beyond repair because Fawkes was around to heal him but later was conveniently absent when other Horcruxes were destroyed.

Jo replied that Harry did not consult with Dumbledore's portrait for three reasons: (1) The portrait was not available as it was at Hogwarts, (2) Dumbledore didn't want to tempt Harry with the Hallows but wanted him to learn of them slowly due to Harry's flaws and (3) it was too easy and there wouldn't be much of a plot.

When asked to confirm that the Death Eaters were based on the Nazis, Jo answered by saying that it was a conscience decision, people will die and that you shouldn’t believe what your government or newspapers tell you.

When Jo reminisced about completing the first versus the last book she said that it was very similar and that her husband, who was in attendance, hated her for a few weeks because she was unbearable to live with.

After Jo had answered the initial 12 questions a spokesperson from Scholastic revealed that four additional questions would be asked by sweepstakes winners in the audience. First up asked if Malfoy owed Harry a life-debt and Jo stated that there was no magical tie between the two but that Malfoy had to be forever grateful to Harry for saving his life (which is evident in the last chapter of book seven when they meet at platform 9¾).

Donna, from the very top of Carnegie Hall was next in line and after sprinting down the stairwell she breathlessly asked, "What were the careers after graduation of James, Lily, Sirius and Lupin?" Jo said Lupin was unemployable and impoverished because of his condition and that James, Lily and Sirius were employed full-time in the Order of the Phoenix (James was rich and that's how they lived).

When asked did Hagrid ever find love, the audience sighed and Jo responded that she should probably change her answer but that, no, he never did.

The last question of the night referred to Snape's portrait and Rowling answered that Harry would have insisted it be hung in the headmaster's office at Hogwarts but that he probably would not have visited it to converse with Snape. Jo is still surprised when she reads that fans are torn about Snape, who is a complicated character, and unequivocally stated that Snape was "bitter, vindictive and mean."

A special thanks goes to Alisha for inviting HPANA to the event. Geri would like to say on a personal note that the night was brilliant and awesome and that seeing J.K. face-to-face was something that she never thought would happen! You can see some photos from the event here