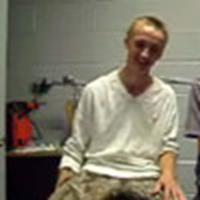 Tom Felton will be back for 'HBP' & more

in the 2006 Junior World Carp Tournament in New York. In a video interview Tom mentions that current filming is "going very well" and that he "is looking forward to doing" Half-Blood Prince, which is a "penciled-in contract, it's not set in stone." Tom also discusses his scenes, or lack of, in Goblet of Fire.

In the second interview Tom and his brother Chris talk about their participation in the fishing tournament.