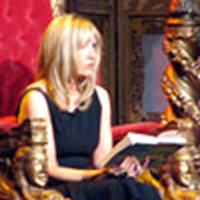 The two nights of Harry, Carrie and Garp at Radio City Music Hall in New York City last week had most of us in attendance scribbling notes, sneaking photos and reflecting. Unfortunately that meant we didn't have the complete, exact text of what JK Rowling said in response to fan questions... until now.

What follows is a transcript of the second night's highlights, courtesy MSN Video, with pregnant pauses, sighs, laughs and cheers intact (it's unknown if the first night's video will be made available, but you can read those highlights

Though the event each evening was kicked off by actress Whoopi Goldberg, we're skipping right ahead to JK Rowling's segment: 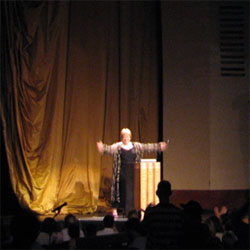 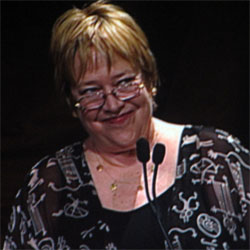 Bates: Thank you... thank you very much. Thank you and good evening. Tonight, our next author... [cheers]... makes her much-anticipated return to the United States, the first visit in six years. And that may explain why at this moment I feel sort of like Ed Sullivan as he was about to introduce The Beatles. [...]

But this moment seems somehow bigger. Because with Pottermania, JK Rowling has managed to pull off a feat that no one ever thought possible: Transforming an entire generation of children into wild, screaming, frenzied fans... of books.

Let's not forget that Harry Potter arrived on our shores at a perilous moment in time. Just when it seemed that technology had infiltrated every last aspect of our lives, most at risk were our children. Between PCs and Playstations, modems and multiplexes, we were in danger of losing an entire generation to the ravages of ADD.

Then, along came an author who tamed the cacophony with a whisper. With words on a page, JK Rowling lured kids away from the screens and into the quiet of their rooms, and took them to places where Google does not go.

With each thick book that they conquered, children gained the confidence to take on the next. The Harry Potter books that collected on shelves were showcased like trophies. And in the months they waited for the next installment, something else amazing happened to these new readers: They became re-readers, devouring again and again the same book for pleasure they had rushed through the first time just for plot.

Of course, in our entertainment age, it was inevitable that a book and a hero as popular as Harry would make his way from the book back to one of those screens. There were those who feared that the special effects of a movie would put an end to the reign of the book, and that children would rather watch a pre-imagined world of wizards than conjure up their own from a page. Instead, Harry's legions went eagerly to the movies, and then faithfully back to their books. That's how we know that JK Rowling's spell was not-so-easily broken; that the magic she conjures turns children into readers for life.

Question: If you could bring one Harry Potter character to life, other than Harry, who would it be? 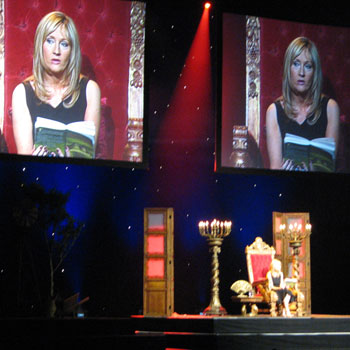 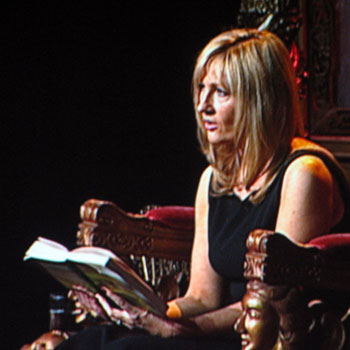 Rowling: Personally, although it's a really tricky one... Hagrid... if I could have anyone. Because I think we'd all like a Hagrid in our life, liability though he often is. It would be really great if I met a fundamentalist Christian, to say, "Would you like to discuss the matter with Hagrid?"

Question: In Half-Blood Prince, Aunt Petunia is said to be oddly flushed when Dumbledore announces that Harry will be returning only once more to Privet Drive. Does this mean that Aunt Petunia harbors a hidden love or fondness for Harry and the connection he provides her to the wizarding world?

Rowling: That's an excellent question. And like all the best and most penetrating questions, it's difficult to answer. But, I will say this: There is a little more to Aunt Petunia than meets the eye. And you will figure out what that is in book 7.

Question: I absolutely love your books. I'm not a big reader, but your books make me want to read, and that makes my mom happy. She loves your books too. In your recent interview, you hinted at two main characters dying, and possibly Harry Potter too. Would Dumbledore be considered one of the main characters, or do we have the chance to see him in action once again. Since he is the most powerful wizard of all time, and Harry Potter is so loyal to him, how could he really be dead?

Rowling: [laughs] I feel terrible! The British writer Graham Greene once said that every writer had to have a chip of ice in their heart. Oh no... I think you may just have [ruined?] my career. I really can't answer that question, because the answer is in book 7. But... you shouldn't expect Dumbledore to do a Gandalf. Let me just put it that way. I'm sorry.

introduces himself and son. JK applauds with audience and says: "I'm not sure this is fair. I think you might be better at guessing plots than most. But off you go."

Rushdie: Until the events of volume six, it was always made plain that Snape might be an unlikable fellow [JK: uh huh], but he was essentially one of the good guys [JK: uh-huh] [audience: 'yes!' and cheers]. [JK: I can see this is the question you all really want answered.] Dumbledore himself had always vouched for him [JK: yes]. Now we are suddenly told that Snape is in fact a villain and Dumbledore's killer [JK: uh-huh]. We cannot, or don't, want to believe this [JK laughs]. Our theory is that Snape is in fact still a good guy [JK: right], from which it follows that Dumbledore can't really be dead, and that the death is a ruse, cooked up between Dumbledore and Snape, to put Voldemort off his guard, so that when Harry and Voldemort come face-to-face [audience and JK laughs], Harry might have more allies than he or Voldemort suspects. So: is Snape good or bad? [JK laughs and audience cheers] In our opinion, everything follows from it.

Rowling: Well, Salman... your opinion, I would say, is right. But I see that I need to be a little more explicit... and say that Dumbledore is definitely dead. And I do know there's an entire website that's name is DumbledoreIsNotDead.com

, so I imagine they're not happy right now. But I think I need.... You need... All of you need to move through the five stages of grief [audience and JK laughs] and I'm just helping you get past denial. So, I can't remember what's next, it may be anger, so I think we should stop it here. Thank you.

Question: As a librarian, I would first like to thank you for attracting so many students (and adults as well) to reading. Since the Harry Potter series will be unfortunately ending, what does the future for you, and for your readers, hold? Do you have something planned, to keep the anxious students and adults, waiting to be release?

Rowling: I thought you were going to attack me for Madame Pince, and I would like to apologize to you and any other librarians present here today. My get-out clause on this is always: If they'd had a pleasant, helpful librarian, half my plots would be gone. Because the answer invariably is in a book, but Hermione has to go and find it. If they'd had a good librarian, that would've been that problem solved, so, sorry. I have a shorter, mercifully, book for, I think, slightly younger children, that's half written, so I may go back to that when Harry's done. I think I'll need a short mourning period though, you'll have to allow me a short time to get past Harry.

Question for Stephen King: ... what kinds of scary stories keep you up at night? 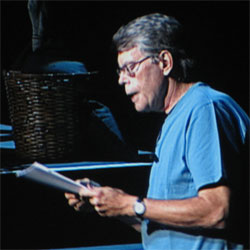 King: I'll tell you what. I think our idea of what scares us changes as we get older. [...] As a young person, one of the scariest things I ever read was Lord of the Flies. [...] Sometimes you get surprised into fright. When I picked up the Harry Potter books, I was not prepared for the depth of some of the frightening passages in there. Frankly, I was surprised by how scary the deatheaters were. [...] I try to keep up with the competitors. The deatheaters are good... [JK: "I scared Stephen King." SK: You scared Stephen King. Yeah. I hope you're proud of yourself!" JK: "Oh, I'm very proud of myself!"]

Question: What is the one question your fans have never asked you, and should have?

Rowling: Oh, God... How can I answer that? I can think of a couple of things that give away the ending of book 7. Having got this far... having got sixteen years down the line, I kind of feel that would throw it away. For me, anyway, having put the effort in. I think that I've been asked excellent questions, it's just that the final book contains a couple of pieces of information that I don't think you could guess at. I'm sorry... You see, people think that it's all so fixed in my head. It's not that obsessively plotted out. For example, this afternoon I believe I changed my mind on the title of book 7. Having been quite convinced that I had the title, I suddenly thought, "No, that would be better, wouldn't it?" in the shower just before coming out here, so... But you know what, I'm not going to tell you either version, because... [audience moans]. Oh, come on! Now really! Have I not given you enough? I gave you Aunt Petunia, I told you Dumbledore is really [JK moves finger across her neck in swift motion]. So, I am trying to give something to you. I suppose it's that question. Everyone's really pleased you asked that question. It's me who's let everyone down, not you.

Question: If you were to have dinner with any five characters from any of your books, who would you invite, and why would they be on your list?

Stephen King: Any five characters, from any of my books? Honey, I'm eating alone. [...] I would eat with Harry, Hermione and Ron. [...] I can think of other people's characters I'd eat with.

Rowling: I'd take Harry to apologize to him... Um, I'd have to take Harry, Ron and Hermione [King: sure]. I would... this is... [King: Hagrid, take Hagrid]. See, I know who's actually dead. [King: Pretend you can take anyone.] Pretend I can take anyone? Well then I would definitely take Dumbledore... I'd take Dumbledore, Harry, Ron, Hermione... and... [audience shouts out suggestions] um, Hagrid. I'd take Hagrid, yeah.

and The Haven Foundation, which we will profile in the near future.