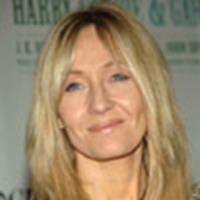 Rowling partially 'relieved' to be at the end

a press conference ahead of her charity reading with Stephen King and John Irving. At the press conference Ms. Rowling commented that she will have to go through a bereavement process when finished writing the last book in the series.

On the one hand, I am going to feel sad. Harry's been an enormous part of my life and it's been a turbulent phase of my life and he was always the constant.

So there will be a sense of bereavement.

But there will also be a sense of liberation because there are pressures involved in writing something as popular.

Wonderful though it's been, I think that there will also be a certain freedom in escaping that particular part of writing Harry Potter.

When asked about the two deaths that she previously mentioned, Ms. Rowling said:

You can now see pictures here

Ms. Rowling not to kill of Harry off in the last installment, but Rowling made no promises.

UPDATE: Veritaserum has posted the full audio of the press conference.

UPDATE II: Video of the press conference can be seen here