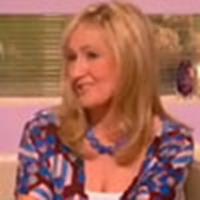 JK Rowling appeared on the Richard & Judy Show in the UK, and had a few things to say that may interest fans.

Some highlights from the show:

You can read the rest of the highlights here

courtesy of SnitchSeeker, but since they seem to be having server issues, here they are for now:

UPDATE: You can see some screencaps of the video here

. Reuters also has an article

online with some direct quotes.

UPDATE II: You can now watch

the video of Jo's appearance on the show, thanks to Ciaran from MuggleNet.