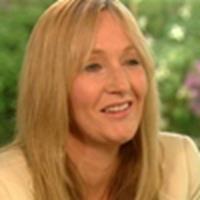 MuggleNet and TLC have posted part II of their interview with Harry Potter author JK Rowling as well as individual reports of their trip to Edinburgh.

Melissa: You said that during the writing of book six something caused you fiendish glee. Do you remember what that was?

You know, that was the last Quidditch match. I knew as I wrote it that it was the last time I was going to be doing a Quidditch match. To be honest with you, Quidditch matches have been the bane of my life in the Harry Potter books. They are necessary in that people expect Harry to play Quidditch, but there is a limit to how many ways you can have them play Quidditch together and for something new to happen. And then I had this moment of blinding inspiration. I thought, Luna’s going to commentate, and that was just a gift. It’s the kind of commentary I’d do on a sports match because I'm — [laughs]. Anyway yeah, it was that.

You can read Melissa’s report here

about their trip to Edinburgh.