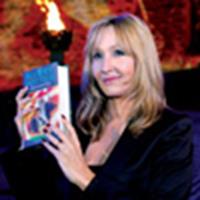 Harry Potter author JK Rowling gave her only magazine interview to Time magazine and they have posted the interview online (the issue goes on sale on Tuesday). In the interview Rowling discusses life, Potter, romance and how the role of fathers play in the books: "I realize that it's kind of a litany of bad fathers. That's where evil seems to flourish, in places where people didn't get good fathering."

Some of the interview is below:

I think Phoenix could have been shorter. I knew that, and I ran out of time and energy toward the end," she says. She is worried that Goblet was overpraised. "In every single book, there's stuff I would go back and rewrite," she says. "But I think I really planned the hell out of this one. I took three months and just sat there and went over and over and over the plan, really fine-tuned it, looked at it from every angle. I had learnt, maybe, from past mistakes."

Because of the demands of the adventure that Harry is following, he has had less sexual experience than boys of his age might have had. But I really wanted my heroes to grow up. Ron's hormones get fuller play in book six. Basically it dawns on Ron that Hermione's had some action, Harry's had some action and he's never got close!

On writing the Harry Potter books:

Rowling is about to say goodbye to a very good friend: Half-Blood Prince is book six of a planned seven, and then that's all she wrote. "I'll be so sad to think I'll never write a Harry-Ron-Hermione sentence again," she says. But her feelings aren't entirely unmixed. "Part of me will be glad when it's over. Family life will become more normal. It will be a chance to write other things."