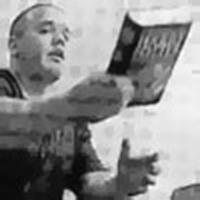 and The Daily Mirror

talk about their involvement in yesterday's reported theft of Harry Potter and the Half-Blood Prince and the ensuing events:

The Daily Mirror says they were "approached by a security guard who worked at a distribution warehouse. Burly Aarron Lambert, 19, demanded £30,000 for a sneak look" at the book. The Sun claimed the theif (who they name as Arun) wanted £50,000 and that a gun was fired during their clandestine meeting.

And [Lambert] was soon boasting how he had evaded massive security. "It was very hard," he said. "They've even got foreign contract workers in there so the staff don't know what it's all about. The whole warehouse is on camera - I had to be really careful. I planned it for weeks. They're doing everything they can to stop people getting hold of it. But they couldn't stop me."

With much thanks to DanRadcliffe.com

, we have scans of everything:

Police confirmed last night that Lambert and his 37-year-old accomplice (pictured in that last photo) had been arrested.

JK Rowling has obtained a court order aimed at preventing the men from divulging any content of the book before its release.