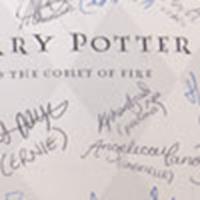 , a place where children can experience the "camp life" and outdoor activities, including environmental awareness.

Other prizes include a "Slytherin Crew" picture signed by Jamie Waylett (Vincent Crabbe) and a DVD set of the three Harry Potter films to date.