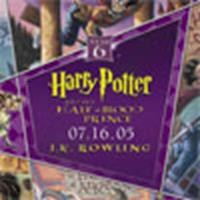 A new poster from Scholastic has been released featuring a patchwork of previous Harry Potter covers to promote the upcoming July 16 release of the sixth book from JK Rowling, Harry Potter and the Half-Blood Prince.

Download the image above or get a printable PDF version

has also been added at Scholastic's site. Thanks to MuggleNet