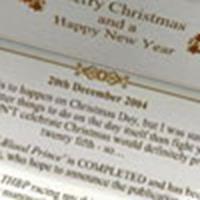 The author of Harry Potter has given her fans an early Christmas present: a note on her official site stating that her sixth book, Harry Potter and the Half-Blood Prince is completed and turned in to publishers, who are expected to announce a release date within 24 hours.

UPDATE: Release date has been announced.

To get the information, visitors to JK Rowling's online home had to solve three riddles and answer three questions:

Those who answered the above correctly were rewarded with a message from JK Rowling:

'Harry Potter and the Half-Blood Prince' is COMPLETED and has been delivered to my English language publishers, who hope to announce the publication date within 24 hours.

Although I have joked about HP&THBP racing my third baby into the world, I have in fact had all the time I needed to tinker with the manuscript to my satisfaction and I am as happy as I have ever been with the end result. I only hope you feel that it was worth the wait when you finally read it!

Wishing everybody a wonderful holiday and a happy and peaceful 2005,
With love from,

that Scholastic will make an announcement Tuesday morning.