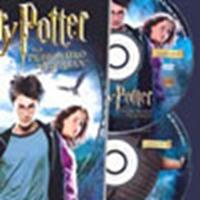 , we get a glimpse of what the artwork on the DVD of Harry Potter and the Prisoner of Azkaban looks like (at least, the Brazilian version):

It seems disc one has the same image of the trio (Dan Radcliffe, Emma Watson and Rupert Grint) as is on the sleeve, and disc two features a picture of puffed up Aunt Marge.

Previously, DVD Answers posted artwork for the U.S. editions, which was later confirmed by The Leaky Cauldron as accurate but subject to change.