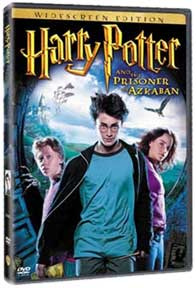 details for the Harry Potter and the Prisoner of Azkaban DVD, to be released November 23 in the U.S.

and fan site The Leaky Cauldron

had obtained some details and cover art, but the official statement includes a list of all features on the 2-disc set:

The disc will be available to buy on November 23 at a retail price of $22.95 (you can expect steep discounts at both online and offline stores).