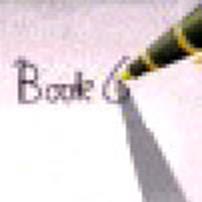 Note: This has been confirmed by JK Rowling to be a hoax. Click for details.

According to Internet reports, a zealous fan has apparently learned the title of JK Rowling's sixth Harry Potter book.

Posted to an online message board

, the information was supposedly gleaned from a secret area on the author's official site

(behind the locked door). The message, written in first person and discussing book six's progress, is dated July 1, which coincides with the expected monthly update of Rowling's site:

Erm... it is perhaps time for me to reveal the title of Book 6! I am nearing completion of the first draft and have definitely decided upon a title. I had numerous possibilities in mind, but as I wrote, I realized that only one did the book justice.

The more clever Potter fans may recognize that the title relates directly to both Order of the Phoenix and Chamber of Secrets. I will be highly amused if one of you can guess exactly what's going on!

On a side note, the length of the book is growing so fast, I could swear Filius has put an Engorgement Charm on it; an editor's nightmare! I promised myself not to exceed the length of Order of the Phoenix, but every day that passes makes that undertaking more difficult. Incidentally, I have much more work ahead.

Alas, the time has come! Here is the reward for you lot that so diligently figured out all the puzzles on the site. If you scroll down to the bottom of this page, I will reveal to you the title of Book 6!

The title of Book 6 is: Harry Potter and the Pillar of Storgé.

Earlier, the "secret area" in question was simply a locked door that led to a book whose pages were filled with lorem ipsum -- filler text

that is often used when designers are laying out a page (print or online) so they can better visualize how it will look when finished. Rowling commented about it

on her site last month after a hacker found his way in.

Consider Pillar of Storgé an unconfirmed rumor (and keep in mind that "PoS" does not make a very nice acronym). If it's true, however, you might be interested to know the meaning behind "storgé":

Update: Check out this great site

brimming with everything you could possibly want to know about the whole debacle. MuggleNet also offers up some reasons

why this could just be an elaborate, well-executed prank.