For big movie releases, getting to a theater early and waiting in line with an unbounded sense of eagerness and excitement is part of the experience. In fact, it's become tradition for highly anticipated movies. The Harry Potter series is no exception.

While moviegoers know they must often arrive hours before the opening of a major film, it's historically been unofficial. With the advent of the Internet, it's possible to coordinate with fans around the globe to plan events at local theaters. Potterholics are already staging events worldwide, including two in New York City, for the release of Harry Potter and the Prisoner of Azkaban.

, a fan site started by Australian Lincoln Gasking (who later sold the site to movie house Dreamworks SKG). In the late 1990's Gasking began planning -- and lining up -- months ahead of the premiere of Star Wars - Episode I. Complete with mobile Internet access (a rarity back then), onsite video broadcasting and international media coverage, CountingDown pioneered the "line party" event.

Releases of new Potter books from author JK Rowling have spurned similar midnight gatherings, but at bookstores instead of movie theaters -- something unique in the literary world, seemingly borrowed from the motion picture realm. Fans of the novels come in costume for hours of hectic high jinks prior to getting their hands on a brand new Harry book. 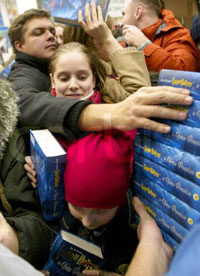 Russian fans clamor for copies of Harry Potter and the Order of the Phoenix, at a busy bookstore

Now the third installment of Potter is set to debut, and in the spirit of this new tradition, groups from fan sites FictionAlley

, LiveJournal and others will attend a group showing of the new movie, directed by Alfonso Cuarón, in New York City on June 5. Row M

, a fan site founded by film industry professionals and others, is hosting a party and private screening on June 3.

"A line party for a movie like Harry Potter gives you an unique opportunity to get together with a lot of fans of the movies and the books," said Amy Tenbrick, one of the lead event coordinators for The Witching Hour

, a Harry Potter convention being held in Salem, Massachusetts in 2005. "Some people are planning dinner before, or coffee afterward. Others are bringing games to play or planning book discussions. Some expect the press to come down and take pictures and interview fans."

"What makes our event special is the line party beforehand," said Jon Simantov, co-editor of Row M. "Since we have our own screening which we control as the fans' private event, there's no need for lining up in the street. We've negotiatied [with Loews Cineplex and Warner Brothers] to allow us our own private screening of the film, just a few hours earlier than opening night."

Instead of worries about getting and keeping a spot in a long line, places are predetermined by the order in which people purchase tickets from Row M. "Although hanging out outside can be fun in good weather, it's miserable when it rains or if it's cold," said Simantov.

What do the theaters themselves make of it all?

Josh Hakala manages a cinema in Philadelphia. "Most welcome events like this with open arms," he said. "I can't speak for others, but I know my theater is really good about it. There were a lot of people who dressed up for Lord of the Rings. I can only imagine what Harry Potter will be like."

For more information on Harry Potter and the Prisoner of Azkaban line parties: