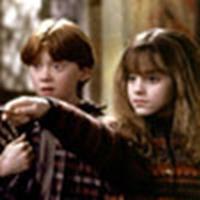 Television network ABC in the U.S. will air an extended version

In exclusive interviews from the Great Hall on the Harry Potter set, the film's stars will talk about their work in the movie in interstitials to be featured throughout the telecast. The telecast itself will present an extended version of Harry Potter and the Sorcerer's Stone, including materials not seen in the original theatrical release. And by exclusive arrangement, at the conclusion of the broadcast, ABC will air a 10-minute sneak peek at the highly anticipated third film in the blockbuster Harry Potter series, Harry Potter and the Prisoner of Azkaban.

Update: You can now view a commercial for this special online.