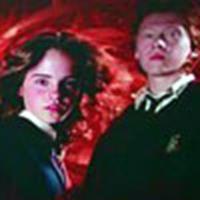 to the movie version of Harry Potter and the Prisoner of Azkaban, the third in the series, have surfaced from Toy Fair 2004, courtesy Row M

Included are a Deluxe Coloring Book and Sticker Book. The photos used in the promotional stand look like previously released images, except for Ron's and Hermione's pictures behind Harry.

Scholastic is the American publisher of the Harry Potter books.