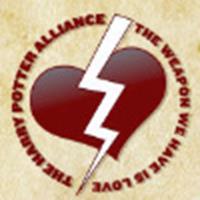 are now in the throws of their Dear Mr. Potter campaign, as pre-orders are now underway to a huge success for the social-activism organization.

Read the official press release below:

Boston, MA - Dear Mr. Potter: Letters of Love, Loss, and Magic, a compilation book of stories and artwork from The Harry Potter Generation, is now available for pre-order. Within 48 hours of sales opening more than 400 copies were sold and have amassed to nearly 1000 pre-orders in less than a month.

Dear Mr. Potter and the Harry Potter Alliance announced several exciting celebrity contributors to the book including Harry Potter actress Evanna Lynch and New York Times best-selling authors Melissa Anelli and John Green. Anelli is the author of Harry, A History and webmistress of the-leaky-cauldron.org. John Green is the author of several best-selling young adult novels and is one of YouTube’s biggest celebrities. The letters from these contributors, along with several others, will only be available to those who purchase the book.

To encourage fans to pre-order, everyone who purchases the book before July 1, 2011 is automatically entered into two exclusive raffles. Both will be unveiled as the close of pre-orders approaches.

Dear Mr. Potter creator Lily Zalon has been particularly affected by this project and knows that it will mean a great deal to the fan community. "It's always been very clear that Harry Potter changed everything for a lot of people and the kids, many now adults, that grew up with these books will forever be a part of the Harry Potter Generation,” said Zalon. “Until now, there's never been a truly in-depth exploration of why Potter accomplished such an unprecedented level of popularity and loyalty. The letters and pictures in the book illustrate the intimate relationships millions of fans have had with the series."

Dear Mr. Potter features an assortment of content, including letters (some handwritten), photographs, and artwork. The stories told by each fan are incredibly diverse, ranging from heartbreaking and emotional to hilarious and heartwarming, and are written by fans from all walks of life.

In one submission, a teenager named Lidya B. discusses how she discovered Harry Potter after her younger brother passed away as an attempt to remember him through something he loved. There are letters from parents, explaining how they connected with their children by reading Harry Potter together or how they saw their child saved through the magic of J.K. Rowling's world. There are pictures showing siblings with nothing in common bonding over the novels. In many letters, fans talk about how Harry Potter saved them, be it from depression or bad situations at home. All of the submissions in Dear Mr. Potter prove, on a more personal level than ever shown before, that Harry Potter changes lives.

Evanna Lynch’s submission illustrates how serious an impact the novels have had on so many. She discusses, in the excerpt below, how Luna’s character affected her so profoundly.

“Although it was always tempting to go back to that dark, lonely, secure place and although there was still that voice that whispered that I was too odd to risk just being ‘me’, you were always there to remind me that it was okay to be odd, particularly if one did it with aplomb. Through you, Luna, I realized that being odd wasn't really odd at all.”

All profits from “Dear Mr. Potter” will go to the Harry Potter Alliance (HPA), a non-profit organization that engages youth in social justice issues through parallels from the Harry Potter novels. The profits will help to further the HPA’s extensive efforts, specifically surrounding literacy.

In his foreword to the book, HPA Executive Director Andrew Slack says: “These letters share a common thread: they have been written by the bravest of souls whose journeys have been inspired by our dear Mister Potter to love in spite of, and because of, loss. As you say to Harry in his sixth year, “Yes, Harry, you can love…which, given everything that has happened to you, is a great and remarkable thing. You are still too young to understand how unusual you are, Harry.” Indeed, professor. But may I be so bold as to add that these brave individuals who have internalized Harry’s steadfast ability to love, make “the Boy Who Lived” a bit less unusual.”

Dear Mr. Potter can be pre-ordered at www.thehpalliance.org/dearmrpotter until June 30, 2011.

As we move towards the release date, we will keep you updated with any new developments surrounding the Harry Potter Alliance and their great work.