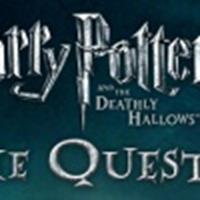 is a new site allowing fans to work together to unlock never-before-seen footage from all the Harry Potter films, play online games and enter contests to win prizes, including a trip for two to the premiere of Harry Potter and the Deathly Hallows: Part 2 in London.

Registered participants in Harry Potter: The Quest are eligible to receive monthly prizes such as Noble Collection Harry Potter merchandise, tickets to The Wizarding World of Harry Potter at Universal Orlando Resort, Blu-rays, DVDs, Games and more. In addition, there will be two Grand Prize sweepstake opportunities ...

As the "global community" of fans earn points on the site, Warner Bros. will unlock new videos featuring "exclusive never-seen-before footage" from the Potter films.

After registering, fans can earn points for themselves and the community by play games, watching videos, sharing on social sites, downloading images and more.

from Amazon, to be released April 15!