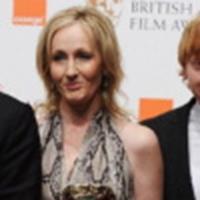 The British Academy of Film & Television Arts held their annual

BAFTA ceremony this evening, honoring the best in British film and television of the year.

an honorary award for contribution to British cinema.

On behalf of the over 2000 people who worked in front of and behind the camera on each of the Harry Potter films I would like to say how honoured we all are to receive this Award. And thank you to Jo Rowling for entrusting us to bring her magnificent books to the screen.

In a red carpet interview, J.K. Rowling commented on her much anticipated writing projects:

I don't know when you'll be able to read it, I've got several things on the go at once. It's hard to know which will be the first that actually appears in print, but I'm writing hard.

When questioned about the astounding success of the Potter films, Rowling added:

[It] is extraordinary. I never got over the thrill of going down to Leavesden Studios and walking onto a set, physically walking into a space I'd imagined in my head.

Stephen Fry, the narrator of the British audiobook versions of the Harry Potter series, was on hand to present the series with the honorary award for Outstanding Contribution to British Cinema.

Watch a video of the presentation right here

For highlights from the red carpet via the BBC, click here