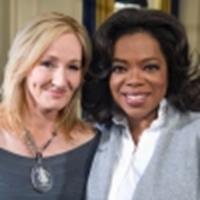 Oprah Winfrey her extreme fame at the heights of the Harry Potter phenomenon was "like being a Beatle" and for a time she "was barely hanging on by a thread," in an interview airing today in the U.S.

"I'm not going to say I won't," she said, but pointed out she had moved on for now.

Check your local listings to catch the interview, taped at the Balmoral Hotel in Edinburgh, on today's Oprah