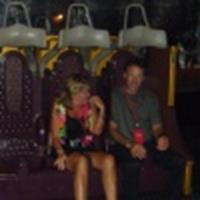 around the internet, especially on popular LiveJournal community ONTD (Oh No They Didn't!). I wanted to clarify and respond to some of the comments and questions I've been reading.

But first, quite mysteriously the entire section in that Reuters article comparing my size and dimensions to that of basketball player Dwight Howard's is now completely missing. So I've pasted it below as it was originally published (see Google cache

On Wednesday Rowling rode on the signature "Harry Potter and the Forbidden Journey" ride, which puts film, technology and robotics together in a new way to bring riders physically close to the action. It is touted as creating a more realistic sense of flying than other soaring rides on the market.

"It made you feel like you were flying. You wanted to just reach out and touch stuff," said Susan Benoit, a tourist from Fredericksburg, Virginia, after her first ride.

Jeff Guillaume of Lansing, Michigan, who in 2002 founded an early online Harry Potter news aggregator and fan site HPANA.com, said fans like him will be disappointed because of limitations on body size to ride the Forbidden Journey.

At 5 feet, 8 inches and 265 pounds (1.72 meters and 119 kg), Guillaume said his mid-section would not allow the restraint system to close, so he could not board the most heavily promoted ride. He said some other rides include special cars for larger guests.

But Coup, said that Orlando Magic basketball player Dwight Howard fit into the restraint and rode the ride this week. Howard is listed on the NBA's website as 6 feet, 11 inches tall and weighing 265 pounds (2.11 meters and 119 kg).

The only posted restriction is a minimum height of 48 inches. Coup said the ride is designed the way it is "to ensure the safety of our guests. It's No. 1." 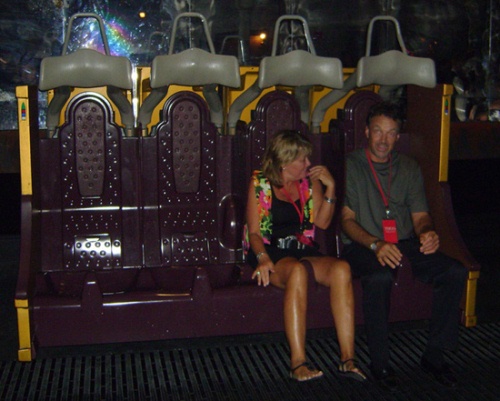 To repeat for the record:

Yes, I am overweight.

Yes, I was prepared in advance (unlike some) for the possibility of not being able to go on it.

Yes, I was ultimately unable to ride.

And yes, I was quite disappointed.

A lot of the debate I've seen is focused on safety, and rightly so. Many rides at many parks around the world use a single-bar restraint system ("lap bars") for a row of people. One larger passenger will cause the bar to lock much higher than the waists/legs/laps of the smaller guests, presenting a safety and comfort issue.

But that is not the case on single passenger restraint systems, which most modern rides, including Forbidden Journey, employ. These are the over-the-shoulder harnesses or lap bars that lock in place differently for each passenger.

I weigh 265 lbs, and according to his NBA profile

, so does Dwight Howard. That would mean the total weight of a passenger is not an issue, just a passenger's dimensions. (There is the matter of whether Howard actually rode Forbidden Journey, as Universal claimed. I can confirm that I did see him personally at the grand opening, but did not personally witness him on the ride.)

Regardless, here's a bit of news

The ride has instituted a screening system. There are two test seats at the outdoor entrance, but honestly, many people are looking up at Hogwarts at that point and not worrying about girth. After the long and winding queue, in the common room before the loading station, there’s another set of four seats -- the enchanted bench folks ride on. I'm not sure what the system is, but team members take potential riders -- not all of them -- and test whether the safety harnass will latch. Not a job I covet.

One time through Forbidden Journey, a wizardly type announced to be prepared to be a tester for the seats. Random folks, even little kids and whole families, were seated and "tested." I thought this took the edge off nicely for those deemed too big.

What it boils down to for me, and what surprised and disappointed me the most was that many of Universal's other rides contain "modified seating" rows for larger guests, and -- let's face it -- a good number of people in the Harry Potter fandom are a bit heavy, so why didn't Universal anticipate and accommodate us here?

It sounds like they're trying to address the expectation and screening issues, but whether or not the ride can ever be adjusted is not known.