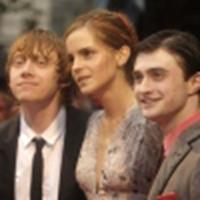 It's a Potterpalooza on television tonight, starting with a 30-minute special on NBC, The Making of The Wizarding World of Harry Potter at 7 p.m. EST / 8 p.m. PST.

Viewers will tour the immersive new land inspired by J.K. Rowling's compelling stories and characters, explore the corridors inside the majestic Hogwarts castle and wander the cobbled streets of Hogsmeade. Viewers will also be treated to exclusive cast commentary and a sneak peek at the authentic detail woven through the entire environment, as well as the area's new marquee attraction, Harry Potter and the Forbidden Journey, that will forever change the theme park attraction experience.

Then on the 2010 MTV Movie Awards at 9 p.m. ET, an exclusive clip from Deathly Hallows will be shown, and Half-Blood Prince is in the running for five awards, including Best Villain for Tom Felton as Draco Malfoy. (In an odd twist, Felton is up against Helena Bonham Carter for her portrayal of the Red Queen in Alice in Wonderland. She, of course, also plays a well-known villian in Potter, Bellatrix Lestrange.)