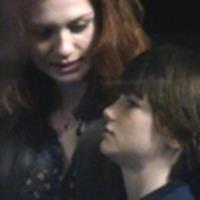 The first shots of Harry Potter and the Deathly Hallows filming at King's Cross are here!

They show an aged Daniel Radcliffe and Bonnie Wright as their characters Harry and Ginny, with children James Sirius, Lily Luna and Albus Severus in tow:

(Note that the children are best-guesses based on their age.)

Deathly Hallows: Part II, which includes this scene, is due in theaters July 15, 2011.

UPDATE: Thanks again to ScarPotter

you can see additional

photos from the Deathly Hallows filming currently taking place in London. Filming will continue on location through Thursday of this week.