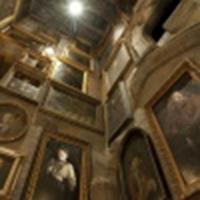 While not as early a date as many expected, Universal Orlando Resort has kept their promise to reveal the Wizarding World of Harry Potter "this spring" by giving it a grand opening of June 18 -- three days shy of the official start of summer in the northern hemisphere.

HPANA and other sites on Wednesday got a sneak-peek at the attraction's highly anticipated Harry Potter and the Forbidden Journey ride with a guided tour by Thierry Coup, Vice President of Universal Creative and Alan Gilmore, art director for the Harry Potter films.

(Scroll down for new pictures!)

The whole environment both inside and outside of Hogwarts was meticulously designed and crafted to exact specifications based on the Warner Bros. film adaptations.

"It's the most spectacular attraction we've ever created," said Mark Woodbury, President of Universal Creative. "This will be the only place in the world to experience Harry Potter in three dimensions."

"It's a great legacy left by J.K. Rowling. Everyone has a different picture in their heads when they are reading, and then Warner Bros. came along and provided a common visual language," said Woodbury. Universal Orlando Resort relied on that established imagery to create the 20-acre park.

The Forbidden Journey ride itself will include:

The attraction's newly created ride system envelops guests in filmed action scenes and moves those scenes with them as they travel through the ride, allowing more time in the center of the adventure and with their favorite characters. This fusion of robotic technology and filmed scenes has never been achieved until now. In some cases, technology had to be invented to achieve the highest level of guest experience. The combination of pioneering, state-of-the-art technology, innovative filmmaking and surprises around every corner make this attraction the embodiment of the Harry Potter book and film series -- and the future of theme park entertainment.

"What we have done will forever change the theme park attraction experience," said Woodbury.

It's possible some guests to Universal Orlando Resort will have access to Wizarding World prior to the June 18 "grand opening," with some media reporting a May 28 soft opening.

with a start date of June 18 are now available on Universal Orlando Resort's web site.