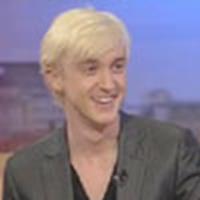 In honor of the release of Harry Potter and the Half-Blood Prince, actor Tom Felton appeared

this morning on GMTV to discuss the DVD release and current filming on Deathly Hallows.

interview, Rupert Grint, discussed growing up during the Harry Potter movies, being friends with Daniel Radcliffe and what else is on his plate.

with actor David Bradley (Argus Filch), Mr. Bradley recently spoke about Daniel Radcliffe, Emma Watson and Rupert Grint not changing one bit since they made their debuts nearly 10 years ago.

featuring Daniel Radcliffe is now online where he gives a description of BDLive's internet broadcast of Half-Blood Prince which will take place on Saturday, December 12th. You must own the Blu-ray version of the movie to participate.