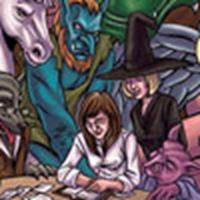 Comic book bio about JKR to be published in December

In December an unauthorized biography comic book will be published

about Harry Potter author J.K. Rowling. The comic book, part of Bluewater Productions 'Female Force' series, will tell the "rags to riches story of a woman receiving government financial assistance through her ascendancy in becoming one of the world’s most recognizable writers."

You can pre-order the book via Amazon