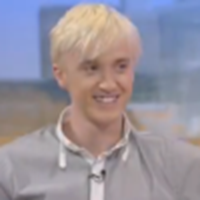 Out promoting next weeks' release of Harry Potter and the Half-Blood Prince Tom Felton appeared on ITV1's breakfast show GMTV.

In the interview Felton talks about, among other things, the long wait between the end of filming Half-Blood Prince and finally being able to see the film. He also commented on growing up with his fellow cast members while filming the Harry Potter films and about it being a little sad to be filming the last installment of the series, Harry Potter and the Deathly Hallows.