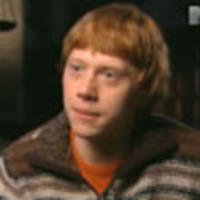 In this piece Daniel talks about the humor and darkness of this film, while Rupert and Jessie talk about their characters 'kiss.'