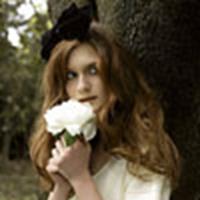 with actress Bonnie Wright (Ginny Weasley) from the Harry Potter movies she mentions her plans for her education, working on the films and with fellow actors.

On filming a banquet scene filming:

In a banqueting scene, you must never be filmed actually eating,' she says very seriously.

Otherwise you'll have to keep on for the sake of continuity. The food gets cold and stale, and you start to feel really sick.' (Especially if the director is David Yates, notorious for his numerous retakes.) You have to make sure the spoon only goes as far as your lips.'