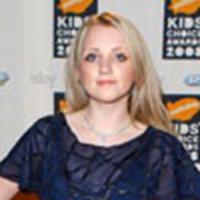 the new new movie, "Half-Blood Prince," attending premieres in Italy, Switzerland, Denmark and Poland, being fascinated by the theater and much more.

I think Luna is very sure of herself and comfortable with who she is, whereas I am more like most people in that I can get preoccupied with what people think of me. I worry about that when really it doesn’t matter because that’s just someone else’s perception, you know? Luna inspires me to not let it affect me as much.

The best part of this experience has been meeting the people who were idols. That has been great because they are amazing people and they do achieve so much though working so hard. But they’re so normal as well and they don’t have airs and you see all sides of them.

I used to be afraid to appear on the film set because I felt I was not ready and what would I do, you know? But I learned that they don’t expect you to be perfect, and that was a great thing to learn. Just to be a part of the film is thrilling, because I’ve always been a huge fan of the books, and now I can say I did my part for it.

Thanks to Bryan from Irish Central for the link.