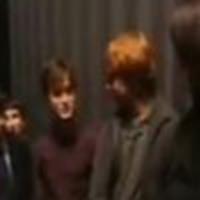 During tonight's airing of footage celebrating Comic Relief's Red Nose Day in the UK, the BBC showed a brief segment featuring Daniel Radcliffe, Emma Watson and Rupert Grint mingling with school children as well as images from the set of the Harry Potter and the Half-Blood Prince movie.

The pupils were taken to Leavesden Studios where animals trainers showed them owls and the dog that plays Fang. They were also shown around the sets and got to watch a bit of filming. During the clip we saw footage of the Headmaster's office, which included a close-up first-look at the portrait of the sleeping Dumbledore.

They also got to speak to Dan Radcliffe, Rupert Grint and Emma Watson. Dan told a story about raising money for the charity one year by doing a sponsored silence.

UPDATE: Thanks to DR.com you can view video of the footage here