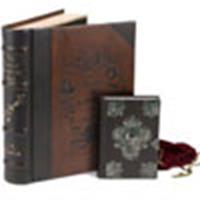 Win a collector's edition of 'Beedle the Bard' from AbeBooks

Residents of the U.S. and Canada have a chance to win the collector's edition of The Tales of the Beedle the Bard by J.K. Rowling courtesy of online book retailer AbeBooks.com. Also included as the prize is a copy of the Sotheby’s auction catalog for the hand-written book from December 2007.

the contest you must answer a question:

The seven hand-written editions of The Tales of Beedle the Bard feature moonstones mounted into their covers. Which 19th century author wrote a novel called The Moonstone that was published in 1868?