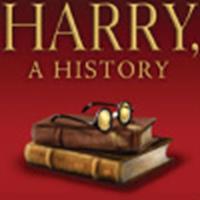 In preparation for writing her novel, Harry, a History

an excerpt of one, in which they talk about the many spoilers that surrounded the release of each of the Harry Potter novels.

This specific quote regards a story in which several copies of Harry Potter and the Order of the Phoenix ended up in a field outside the publishing plant. The man who found them decided to call The Sun (an infamous UK tabloid):

(A quick recap: A Sun reporter was called to a meeting with someone who claimed he had a copy and would sell it for about 50,000 pounds; he brought the police, and two shots were fired.)

Here is what J.K. Rowling had to say on the matter:

"I remember there was a journalist, a TV journalist, who said at the time, very flippantly, 'Ha, ha, it's all publicity, isn't it?" It just felt so out of control at that point, just felt so out of control that the manuscript had suspiciously turned up in a field, that this guy who had supposedly found it just thought, 'Oh, well, the best thing I can do here is phone some newspaper. ... And then of course we hit book six and we think we've seen the most out-there attempt to get a Harry Potter manuscript early, and of course we haven't come close because the we get the guy with the gun. That was pretty serious, that really was not funny. Fiddy told me and I thought it was a joke. I thought she was making a joke.

Just the mere fact that you've produced something that people want to steal, want to put on the Internet, is, for me, very uncomfortable. And when a gun gets involved, the joke's gone out the window. Completely out of the window. I was appalled. The guy who had the gun pulled on him wrote that he'd been in places like Kosovo and it went through his head, "I'm going die for Harry Potter." God forbid.

There is a view out there, 'It's all good,' it all adds to the hype, makes it more colorful. But no, it was really getting out of control. And as people talked about hype it was feeding off of itself, and it was generating this kind of ugliness...that's way beyond leaking plots, that's into violence and intimidation, and who wants to be associated with that? Who wants their work associated with that? You know, let's just publish it two weeks early. Who wants a gun pulled? So you start to get very anxious about it. ... At that level, it's become utterly divorced from what it's about. It's not about the anticipation for a book at all, it's not about love of a story or even wishing to spoil a story. It's become something that people want to be attached to because it's the quickest way they can see to get some publicity for themselves or notoriety for themselves and you have this fringe - I can't dignify them with the word fan because I think if it wasn't Harry Potter it would be Star Wars or it would be something high-profile enough that they could just get a little bit of face-time. ... it's really got nothing to do with Harry Potter, and yet Harry Potter attracted a large amount of that, latterly, I'd say, for the last three books. ... It's raising expectations in an unhealthy way, it's making people sick of the sound of Harry Potter for the wrong reasons, and most seriously you're getting into the realm of literally fraud, intimidation, violence, theft, and nearly always it had nothing to do with fandom.

To pre-order the book, which hits bookshelves on Nov. 4, click here