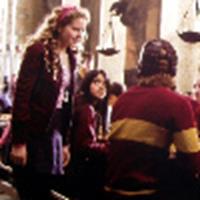 several hi-res scans from the Half-Blood Prince feature in Empire Magazine, which was released over the summer.

The scan depicts Lavender, talking to Ron, as Harry, Hermione, Ginny, and others look on in the Great Hall, with the Gryffindor quidditch team in full outfit.

Thanks to Bonnie Wright Online

and to Snitch Seeker