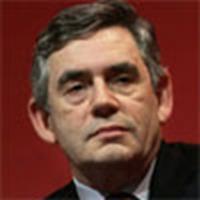 ($1.83 million) to the Labor Party in the United Kingdom, in a rather personal appeal she hopes will highlight the plight of the poor.

"The Labor government has reversed the long-term trend in child poverty, and is one of the leading EU countries in combating child poverty," said the nation's richest author, whose fortune was recently estimated at 560 million pounds.

"David Cameron's promise of tax perks for the married, on the other hand, is reminiscent of the Conservative government I experienced as a lone parent."

"It sends the message that the Conservatives still believe a childless, dual-income, but married couple is more deserving of a financial pat on the head than those struggling, as I once was, to keep their families afloat in difficult times."

The Conservative Party there leads by 20 points in a recent opinion poll.

that his Labor Party will "stand beside and help" the people of Britain in the difficult times ahead, referring primarily to the unstable world economy. "You can leave people on their own. Or you could choose to stand beside people."

"I believe that poor and vulnerable families will fare much better under the Labor Party than they would under a Cameron-led Conservative Party," said Rowling.