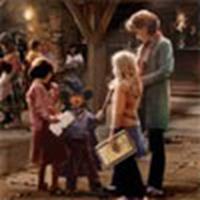 We're delighted to say that the Three Broomsticks will be part of The Wizarding World of Harry Potter at Universal Orlando Resort... and now you can get your first glimpse!

Get a peek at the NEW early concept artwork depicting the Three Broomsticks, where you may enjoy authentic food and drink from the world of Harry Potter upon its opening at Universal's Islands of Adventure.

Also available is a new poll

asking fans which magical refreshment they would prefer to order (one is already heavily favored in the results).