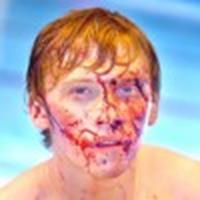 From the set of his new movie Cherry Bomb, actor Rupert Grint (Ronald Weasley in the Harry Potter movies) discusses

the recently released teaser trailer and the fact that "it's ... just to get people excited."

Ron Weasley nearly dies after he drinks Professor Slughorn's poisoned mead, a gift the professor was meant to pass on to Dumbledore, in an assasination attempt gone horribly wrong. Ron had already been poisoned in one sense — "He gets poisoned quite a bit in this film," Grint laughed — because he ate Romilda Vane’s chocolate cauldrons (also meant for someone else, this time Harry) which were spiked with love potion. Harry rushes his friend off to the potions professor for a quick fix, only Ron goes from a bad predicament to a lethal one in mere moments. "That was a really fun scene," Grint said.