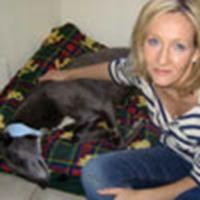 The author of the Harry Potter series has adopted an animal from Celia's Greyhound Rescue in Fife, The Herald reported

JK Rowling, who gave more than £950 above the normally requested donation, was looking for a mate for her Jack Russell terrier named Butch:

It was only when [Celia Ferine] asked for a £30 donation to Greyhound Rescue Fife, which the 61-year-old runs with her husband, Jimmy, near Kirkcaldy, that she realised she had been dealing with the world's most famous children's author.

At the bottom of a cheque for £1000 was the signature millions of Harry Potter fans would die for. "When I looked at the cheque I couldn't believe it. The first thing I noticed was the amount she had made it out for," Mrs Fernie said yesterday.

Rowling was grilled on her home and yard conditions, especially whether there was a fence high enough to keep the greyhound, named Sapphire, safely contained.

Pictures of Rowling and her dogs can be viewed here!

Thanks to Joseph for the tip.